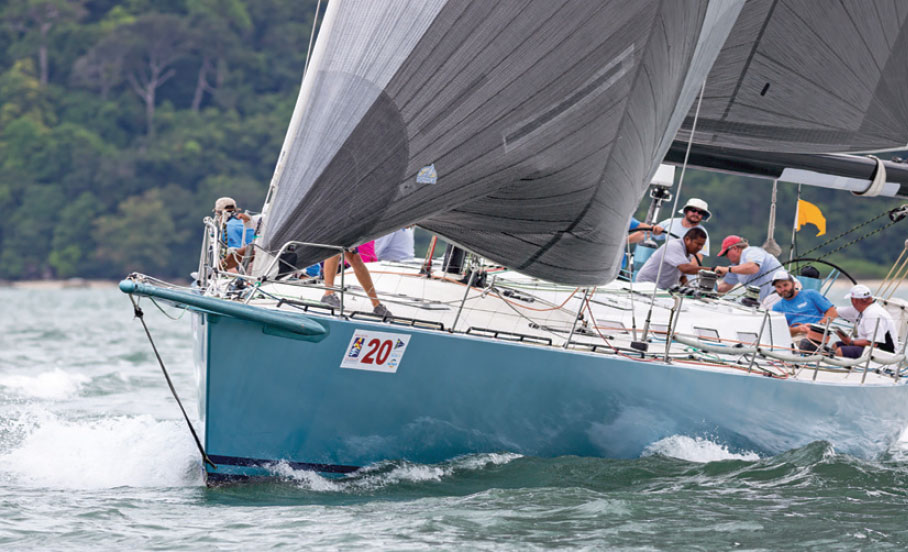 lThirty-one yachts took part in the 28th sailing of the Raja Muda Selangor International Regatta (RMSIR), with crews coming from as far as Australia and Japan to compete in the event. The 8-day challenge consists of three overnight passage races, totaling 260nm, 3 days of har-bour racing in Penang and Langkawi, plus five prize-giving parties, along the way. This regatta is described as “very character building and a chal-lenging event”, and it lures back sailing teams, year after year.

Although suffering a medical emergency, after defending the IRC 1 title last year, Sarab Singh has recovered and his crew of the Wel-bourn 52 Windsikher II, returned and looking forward to making it a three-peat. Phillip Turner’s Reichel/Pugh 66 Alive skippered by Duncan Hine, returned from Australia and expected to be in the running, after their familiarization in the 2015 regatta. Never underestimate the smaller yachts in this class: Nick Burns/Fred Kinmonth’s Sydney GTS 43 Mandrake III; Gordon Ketelbey’s Farr 40 Ramrod; and Geoff Masters Mills 41 Meraki are all capable of exerting pressure in the handicap stakes and claiming the prestigious Raja Muda Cup.

At 72ft long Geoff Hill’s Smith 72 Antipo-des topped the size scale and has won the Premier Cruising Class before but would like to avenge the Malaysian Armed Forces Farr 520 Zuhal skip-pered by Mohd Masyuri, after a tight fought battle that won them the Jugra Cup last year. Andrew Cocks Simonis Voogd 56 Starlight are always in the mix and has the potential to beat the rivals.

Richard Barnhurst’s Beneteau First 45 Fast-Track is making their debut, while David Fuller's chartered Beneteau 44.7 Fujin has scored IRC handicap wins in all the top classes, are excited about having a tilt at this title.

After many years absence, one of the founding fathers of the RMSIR, Dato Johan Ariff's Swan 46 La Samudra II skippered by.

Rounding out the classes, Guy Scott’s Stealth 12.6 Afterburner was the only multihull entered this year and was a bit lonely, but with plenty of other yachts around to compare the speed difference, was able to vie for overall line honours.

Folding sailThe final day of the 2017 Raja Muda got off to a wet start when morning rain led to the AP flag being flown and the last two Langkawi inshore races being pushed back for a bit.

Once the all clear was given and the race back in progress, the boats raced in relatively favourable conditions with winds at an average of 10 knots and the sea relatively calm.

In Class 4, Fujin (David Fuller) built a strong lead early on in the overall race to put enough distance between any possible con-tenders to secure the Class 4 title and JCC RE Challenge Trophy. Prime Factor (Max Palleschi) narrowly edged past Jing Jing (Jeff Harris) to claim second place in the overall division standings, leaving the latter in third.

La Samudra 2 (Dato Johan Ariff, skip-pered by Dominic Liddell) competed to honour the late Fay Khoo and honour their former sailing mate they did. La Samudra 2 sailed to the top of Class 6 to win the overall division title and the Eveline trophy. Finishing second and third in Class 6 were Old Pulteney Cabaret 6 and Marikh (the Malaysian Armed Forces, skippered by Jamil bin Ahmad Urayah).

The regatta used the Yellow Brick (YB) Yacht Tracking system, which is used in top international sailing events such as the Rolex Sydney Hobart, World ARC 2017, Rolex Fast-net, Sydney Gold Coast Race and many others. It was used during the RMSIR passage races from Port Klang to Pangkor, then Pangkor to Penang and lastly, Penang to Langkawi provid-ing essential safety information if an on-board emergency occurs.

The RMSIR was established in 1990 by the RSYC’s Royal Patron, the Sultan of Selan-gor HRH Sultan Sharafuddin Idris Shah (who was then Raja Muda Selangor) together with Dato Johan Ariff and Jonathon Muhiudeen. Yachts competing in the regatta range from top class IRC1 racers to beautiful classic cruisers with long overhangs dating back over 100 years. Skippers and crew have to cope with the unpre-dictable weather, changing tactics and heavy shipping traffic in the Straits of Malacca, all of which make the regatta a matchless experience.

Known for its unpredictable winds, weather and tide, the RMSIR provides excite-ment for even the most experienced of sailors, along with an interesting challenge. Add to that a little bit of sightseeing and fun social events at every stop and you have a regatta with everything. The month of November typically marks the height of the northeast monsoon on Peninsular Malaysia where sailors can expect anything from glassy waters and light breeze to a sea heaving with two metres of swell or higher and 30 knot squalls blowing off the coast. In other words, these northeast monsoon months bring conditions that are challenging enough even for seasoned sailors2017