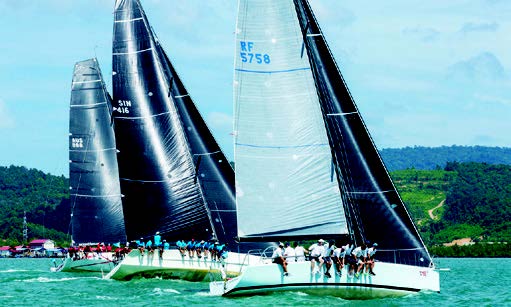 International - The Royal Selangor Yacht Club has an-nounced that the 31st Raja Muda Selangor International Regatta (RMSIR) will run from the 13th to 21st November 2020. The regatta organisers intend to deliver another sailing event that is true to their motto “9 Days, 4 Locations, Full On!”

Those tried and tested locations are Port Klang, Pangkor, Penang and Langkawi, with the well established mix of three overnight coastal passage races, some 240 miles in total, plus three days of harbour racing in Penang and Langkawi. With regatta dinners almost every night, a Rickshaw Race and plenty of opportunities to socialise, onshore activities can be just as demanding as the sailing.

The RMSIR is Asia’s second oldest race and Southeast Asia’s most challeng-ing sailing event organised annually by the RSYC in association with the Royal Ocean Racing Club (RORC) and the Malaysia Sailing Association. They are assisted by the Royal Malaysia Police (RMP) and Royal Malaysian Navy (RMN).

The RMSIR was launched in 1990, largely to cater for international yachts that were sailing up the west coast of Malaysia to par-ticipate in Kings Cup, which is always scheduled to start one week after the end of RMSIR. Yachtsmen form RSYC in Port Klang soon discovered that yacht owners enjoyed the challenge of a regatta that combined seamanship, navigation and local knowledge with the joy of competing and sailing. The icing on the cake for those entering Class One is the opportunity to be presented with the coveted perpetual trophy, the Raja Muda Cup.

The basic format of RMSIR has remained unchanged over the years but the organisers have introduced a number of technical innovations to improve the overall experience for sailors. The regatta website has an easy to use online registration module and during the event results are rapidly posted on the site.

Three years ago, the Yellow Brick (YB) Yacht Tracking system was introduced with YB trackers issued to each skipper, enabling the position of each yacht during passage races to be displayed on a chart on the website. Friends and family members can now follow the progress of their favourite team, crew members with internet access can monitor their position against other competitors, and the race team can more easily locate a boat in distress. In 2019, the use of these trackers was taken one stage further, with the introduction or Virtual Finish Lines for the passage races. The finish boat was dispensed with, as the trackers recorded very accurate finish times crossing a “virtual line and sent them on via a satellite link. When received, these times were fed directly to the results software. This system will be used again for the 31st RMSIR.

RMSIR has always had an interesting mix of yachts, from full on racers through club boats to classic cruisers. This year organ-isers will focus on attracting more boat owners in certain classes, particularly Class Two Premier Cruising, as the format suits cruising yachts over 50 feet in length and there are a number of potential competitors in SE Asia. The classic division as always featured some fine boats, including Dato Richard Curtis’s Eveline and more recently the splendid two-master Rona, built by Stowe and Sons in Shoreham, UK in 1895. It is expected that these classics will be joined by at least two more from the region for the 31st event. Club racers have always been well represented, with ten entries in 2019, and it is hoped the class will continue to expand.