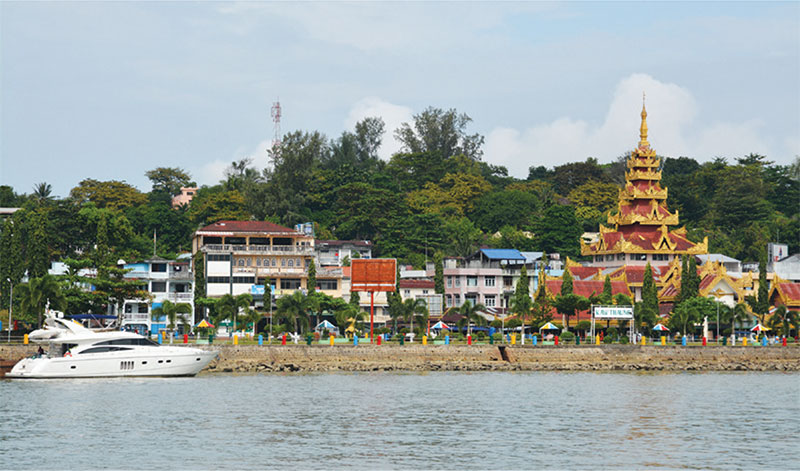 For me, the very term “Mergui Archi-pelago” conjured up some romantic magic, the first time I heard it, maybe twenty years ago. Like something from the realm of Harry Potter’s Hogwarts, the sylla-bles themselves stimulated images of far-flung, little-known islands steaming in a tropical heat haze at the edge of the world.

When I recently came to sail, dive, hike and kayak through the Mergui, I wasn’t disap-pointed. The islands of the archipelago to the south of mainland Myanmar are just as magical and romantic as my imagination had painted them and the opportunities for stunning diving and adventure are second to none.

Home to the curiously elusive Moken sea gypsies, and with thousands of pristine beaches -many unnamed- and islands rumored to still be home to tigers, this is indeed a magical realm in a world that has few such places left.

To give you an idea of what a wild and still unexplored part of the world this is, look no further than the fact that no-one can agree upon how many islands actually comprise this won-drous realm. Queen Victoria’s cartographers in the nineteenth Century counted 804 islands in the Myeik Group when Britain were the colonial masters of “Burma”, as it was named then. These days the Myanmar government maps say that there are over 4,000 islands in the group.

It all depends what you are willing to call an island.

39Some small rocky outcrops, of which there are thousands dotted around the Mergui, were counted by the ruling Generals’ map makers, while the British were less generous in their designations.

Some of the islands have solid cricket-playing British names like Saint Matthews Island and Evelyn Park; some have Burmese names like Nathitwat Athol and some, like the elegantly named “Island 115” have, well, numbers.

To get to Mergui, we sailed north from Phuket up the west coast of the Isthmus of Kra, past the dive-boat pervaded Similan Islands, and into the ramshackle border town of Kawthoung for final paperwork, then onward into the deep blue-black depths of Burmese waters.

I had imagined the Mergui to be something like the Maldives, but in these depths, there are no atolls.

The islands look like a shower of craggy rocks shot from an ancient blunder-buss out of the seabed towards the sky. Throughout our trip, there were always a few of them in sight. On the map, they form three columns strung like strands of a giant pearl necklace looped over many miles: the inner ones closest to the coast; a vast scattering in the middle ground; and the outerisles, many of which are still out of bounds due to military operations.

We spent glorious days diving on unmapped, vir-gin sites; kayaking through huge mangrove swamps and rivers, and mountain hiking through lush jungle teem-ing with bird and wildlife. You soon realize you need at least a week on a yacht, just to scratch the surface.

The diving is stunning, you might be the first recreational divers to see a particular reef. It goes without saying that much of the coral and marine life is world class with plenty of large pelagic species to enliven the scene.

The only other humans you are likely to see are a few of the enigmatic Moken sea gypsies. They are a semi-no-madic people who are gatherers of seafood (mainly sea cucumbers) rather than fisher-folk. When the British mis-sionaries started giving them fishing hooks and equipment in the 1920’s they were amazed to see them hung on walls as ornaments, while the sea gypsies continued their daily routine of gathering sea cucumbers.

Here is the itinerary of our recent ten-day trip to give you a taste of what you can expect in this beautiful part of Southeast Asia.

We embarked in the small border port of Kawthoung (Victoria Point), while our captain finalized the yacht’s harbor clearance. We tried some of the local delicacies at the fresh food market, such as Kawthoung fried chicken, local Myanmar beer, and freshly-pressed sugar palm juice all at bargain prices. You could also cruise to Barwell Island and stay overnight.

There’s a gorgeous anchorage between three islands (Bada, Caws and Potter Island), with white-sand beaches and sand spits. We went beachcombing on Poni Island’s west beach and snorkeled to check out the surrounding reefs. Pulau Bada’s west beach just south of the headland was partic-ularly pretty. At the northern end of the beach there’s a little mangrove river going behind the beach all the way inland, great for kayaking.

You could easily spend several days at Great Swinton. The island has just about everything: beautiful beaches, fantastic scenery, good jungle walks for spotting local bird and wildlife, and great snorkeling and diving. There’s a small waterfall near the east point and more mangroves.

Lampi is the largest island in the National Park Group, and mostly uninhabited with an occasional fishing village. We explored the Mangrove River on Lampi’s west coast by kayak during high tide. The islands around Lampi are also worth visiting, as they have thriving wildlife including sea eagles, hornbills and fruit bats. Often macaques are seen on the beaches foraging for food. On Pu Nala there’s a small village with a Buddhist temple.

Clara is one of the prettiest islands in the area, with a shell beach, coves and inlets and exceptionally clear waters excellent for snorkeling. We checked out Waterfall Bay on the northwest side of the island, which has a white sand beach and a spectacular waterfall with cool and clear water.

We explored the northern bays of Great Swinton for more snorkeling, swimming and kayaking and dived into ‘Shark Cave’, a swim-through which is home to several (harmless) reef sharks. In the evening, we lit a bonfire and had a wonderful beach barbeque.

In the northwestern bay of Loughborough is a small village populated by Moken and fishermen. There’s a small local school where visitors are welcome. We navigated the creek on the east side of the island by kayak, enjoying the gorgeous scenery along the stream.

On South Twin’s west side there’s a small beach and bay, with space for just two yachts to anchor! The island is quite rugged here and an easy climb brings you to the crest for a tree-shaded walk.

Underwater there are deep, large rock structures form-ing gullies, long swim-through passages and overhangs. In the shallows, we found fine table corals amongst the boulders, home to much marine life. We were delighted every once in a while, to catch colorful ribbon eels peeking out from their sand holes.

We stopped at Horseburgh Island for a swim and snor-kel on the way to Macleod. Myanmar Andaman Eco Resort is the only man-made construction on the island and offers a ‘civilized’ spot for delicious cocktails – at US dollar prices. The resort also offers fabulous traditional massage. We trekked through the jungle to the peak of the island where views are spectacular.

Davis Island is the largest and highest of the scattered cluster of the Aladdin Group, with many small beaches to visit. Davis Island is densely wooded with two main peaks of about 450 meters. Off its eastern shore, there’s a five-and-a-half-me-ter rock surrounded by a reef - great for snorkeling.

Cock’s Combe Island has an interesting swim-through into a lagoon on the east side, which was accessible during low tide only. We snorkeled around Horseshoe Island then enjoyed a lovely lunch on the beach, before returning to Kawthoung in the afternoon.